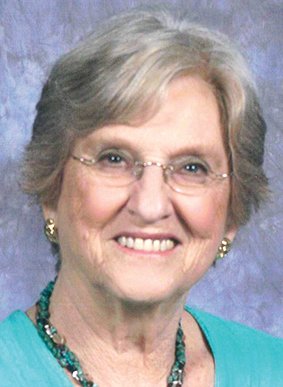 Ella Doris Bolen Johnson passed away with her family by her side on Tuesday, Jan. 17, 2023, after a long battle with Alzheimer’s Dementia.

Doris was born on Oct. 4, 1932, to Charles Grundy Bolen and Frances Heifner Bolen of Calhoun.

Doris was known for her fiery red hair and the personality to match. Both her locks and her spirit kept their color all through her life. Doris attended Calhoun High School where she was a basketball star and valedictorian of her Class of 1950. She married her high school sweetheart, George "Bobby" Johnson, on Nov. 18, 1950. After George returned from service in the U.S. Navy during the Korean War, the couple moved to Cleveland.

Doris worked as a switch operator at Central Service phone company in downtown Cleveland in the early 1950s. When George was transferred as a regional sales manager for Magic Chef, Doris chose Rocky Mount, North Carolina, as the new home for their young family. She liked that the "size of the dot on the map" was similar to Cleveland’s and that its location was perfect for George's new territory in the Carolinas and Virginia. While in Rocky Mount, they were introduced to a new restaurant concept called Hardee's. George and Doris became early Hardee's franchisees and opened their first location in Athens in 1966, and the second on Keith Street in Cleveland in 1967. Back in the city they loved, Doris kept the books for their young business in a tiny room attached to the carport, processing all payroll and accounts payables by hand.

In recent years, Doris served as a director of the George R. Johnson Family Foundation. She has supported many causes close to her heart through the foundation and individually. First United Methodist Church, United Way, Habitat for Humanity, Boys and Girls Clubs, Lee University, Cleveland State Community College and the American Red Cross are just a few that have benefited from her generosity.

As a member of First United Methodist Church, Doris was the secretary of the Veva Thompson Sunday School Class where she had perfect attendance for many years. She was an avid Bridge player, meeting with her clubs two to three times a week for over 30 years. She was also an active member of the Laureate Zeta Chapter of Beta Sigma Phi Sorority until her move to Legacy Village. Those who knew Doris well no doubt witnessed her good-willed competitive spirit. Whether playing cards, cornhole, horseshoes, or that notorious impromptu wrestling match at a sorority meeting, Doris played to win.

It’s no surprise that Doris was also a sports fan. She and George held season UT Volunteers football tickets from the early 1970s and watched the Atlanta Braves anytime they played. However, Doris’s main obsession was men's professional tennis, especially the career of Andre Agassi. She also challenged herself with the crossword puzzles in both the Cleveland Daily Banner and the Chattanooga Times every day until just a few years ago. She would even make sure to work any puzzles she missed while on vacation.

Despite her fears, Doris loved boating and swimming — so long as she kept her head above water. She taught her children to be strong swimmers at a young age and instilled the joys of waterfront living at their cabin on Parksville Lake. Doris loved dancing of all kinds, and even once talked George into square dancing lessons. Ever mischievous, Doris was known for "scaring" anyone she could sneak up on and spooked her children even when they were small. She relished a good laugh and loved slapstick comedy.

Perhaps the greatest joy of her life was spending time with her grandchildren and great-grandchildren. Doris created a world of adventure, safety, and love all under one roof and a few poolside umbrellas. Memories of her screened in porch, her rocking chair, the slightly spooky toy closet under the stairs, and poolside Gondolier pizza birthday parties are ingrained in the hearts of her family. Doris was the family glue during the holidays and the annual Johnson Family “Under the Umbrellas" vacation to Daytona Beach Shores, Florida. Doris fell in love with Daytona many years ago, first with George and good friends Nancy and Claude Ogle Jr. Later she and Nancy kept the tradition and went one week every summer for over 40 years, sometimes taking along a group of close friends.

Doris was a multi-faceted, vivacious and joyful woman committed to her family, her friends and her faith. She touched many circles and lives on in the hearts of all who knew her.

The family will receive friends from 2 until 4 p.m. on Sunday, Jan. 22, 2023, at First United Methodist Church of Cleveland.

A Celebration of Life service officiated by Pastor Curtis McKee and Pastor Rusty Taylor will follow at 4 p.m. on Sunday.

The family would like to extend special thanks to the caring and compassionate caregivers and staff at Legacy Village of Cleveland, especially Shelly and too many to name in Harbor Plus.

In lieu of flowers, donations can be made to the First United Methodist Church of Cleveland or the Alzheimer’s Association of Tennessee at 7625 Hamilton Park Drive, Unit 6, Chattanooga TN, 37421.

Fike-Randolph & Son Funeral Home is in charge of arrangements.